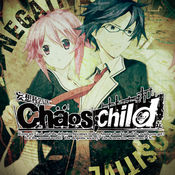 ■Introduction
The 4th product of Science Adventure series following "CHAOS;HEAD NOAH", "STEINS;GATE" and "ROBOTICS;NOTES".
After 6 years from "CHAOS;HEAD NOAH", at the stage of reviving Shibuya, a whole new psycho suspense story is now under "Fetal Movement"--


■Features
*A psycho suspense story adventure game with "Delusion" as a keyword!
* The stage is at Shibuya in 2015, after 6 years from "CHAOS;HEAD NOAH"!
* 6 heroines in the game! Each heroine has different endings from others!
* The chaos of reality and delusion, triggered by the Delusion Triggers!
* A Detective Story Taste from the Mapping Triggers!
* Full Voice!
* Massive volume of over 30 hours total play time!
* You can enjoy this game on either iPhone or iPad as a Universal app!
*Saved data can be stored on iCloud! Play with different devices and share the saved data!?
*Supports Game Center!?


■Stories
It’s been six years since a massive earthquake leveled the city of Shibuya.

The story takes place in October, 2015,
in a Shibuya that is still rebuilding from the damage caused by the earthquake.

Takuru Miyashiro, the president of the Hekiho Academy Newspaper Club, is a boy who loves gossip of every kind.
He finds information on several different murders.
One man was publicly executed during an internet livestream.
One woman was killed in the middle of a street performance.
And another was hung from the ceiling of a hotel…

As they research these cases, Miyashiro and his friends realize a horrible truth.
These murders are the return of a series of killings that plunged Shibuya into terror six years ago.

In Shibuya, people called Gigalomaniacs, with the power to make their delusions real, are beginning to awaken.

Their awakening
will unlock the door of delusions once more…


■2 game systems that affects the story
* Delusion Triggers
As the story moves on, our hero Takuru Miyashiro sometimes will suddenly fall into his delusion.
You can choose whether to make a "negative" delusion or a "positive" delusion, which will change the story later on.

* Mapping Triggers
In the game, sometimes the screen will switch to a map, and you can pin the incidents to the locations on the map to help characters infer what happened.
If you can't pin the locations correctly maybe it'll also affect the story...

【更新日志】
- Required iOS version has been raised to iOS 11 and later from this version.
- Fixed bug that movies are not displayed correctly on some terminals of iOS 12.
郑重声明：部分文章来源于网络，仅作为参考，如果网站中图片和文字侵犯了您的版权，请联系我们处理！